2016 - This year I am going to challenge myself to photograph and name as many wild 'pink' flowers  as I can.

My first wild 'pink' flower of 2016, The Red Dead-nettle (lamium purpureum). It has fine hairs on its leaves which are green at the base and a purplish shade towards the top. The flowers are pink to purple. It can be found during mild winters and is a good source of nectar for bees when there is little else around.
The young tops are edible and can be used in salads and stir fry.

Comfrey is a wonderful plant that draws minerals out the soil and into the roots and leaves making it good for livestock forage and fertilizer. It can be made into fritters to eat and is used in herbal medicines. It also attracts insects.

It is a perennial that has large hairy leaves and bell shaped pink/purple flowers. It grows in damp, grassy places.

The genus Geranium contains 422 species of flowering annual, biennial and perennial plants that are commonly known as Cranesbill. The flowers have five petals, often with veining and are usually a shade of pink. They have distinctive elongated fruits 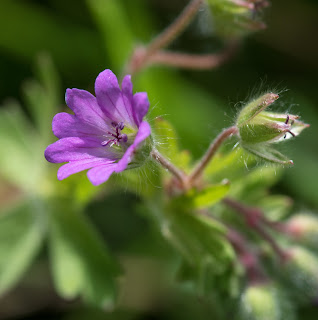 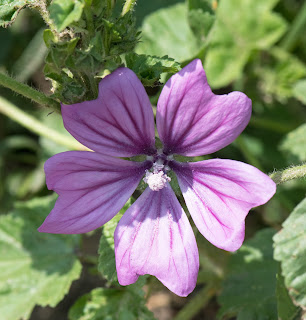 Sometimes known as the 'cuckoo-flower as it arrives about the same time in spring as the cuckoo. The flowers vary from pink through to white. It is pollinated by bumblebees and hoverflies. It is common and widespread.

The flower is pinkish turning blue and has five lobes with a yellow centre. It can be found along woodland paths and edges in damp, shady areas.

A native plant that if found on waste ground and often on arable land.
It has medicinal and therapeutic uses, being used to treat skin conditions. The flowers have also been used to make a yellow dye for wool.
It is an annual plant and flowers between May and October.

Red clover has pink flowers and trefoil leaves. It grows in grassy places on a range of soils and is an important nectar and pollen source for bumble bees.
The clover is often used as food for cattle and the leaves can be used to put into salads or for making tea. The tastiest part is the flower.
The clover has various medicinal uses as it contains isoflavones.

Ragged Robin is a perennial plant growing usually in wet areas such as marshes and fens. It has delicate pink flowers that are visited by bumble bees, honey bees and butterflies for the nectar.

Herb Robert is a sprawling plant with bright pink flowers. It is nicknamed stinking Robert or stinking Bob due to its horrible smell. It has a hairy leaf and reddish - tinged stems and grows in shady places.
Modern research shows the leaves can be used to help reduce blood sugar levels.

Better known as the Blackberry bush. The pale pink flowers appear in spring and early summer on the stems of second year shoots which have very sharp prickles known as thorns. The plant grows vigorously and tolerates poor soils. The blackberries (fruit) appear in the autumn and make wonderful jam.

Common Sorrel is a perennial which grows in all types of grassland. It has small pink flowers that grow in circles around the stem. The young tender leaves can be used in cooking and medicine. They are good in soups and salads or with fish. it is high in vitamin C as well as containing various other vitamins. It makes an effective treatment for scurvy and for flushing out toxins. It is credited with having many other health benefits.

Foxglove is a biennial that flowers June - September. It has pinkish/purplish flowers with darker spots in the bell. It grows in woods, on moors and cliffs, especially on acid soils. Every part of the plant is poisonous.
An extract of digitalim is taken from the leaves of the plant. This is used for cardiac conditions to control an irregular heart rate.

Vetch is a member of the pea family. It is a scrambling plant with long stems with tendrils on the ends. It has oval leaves and pinkish flowers. It is able to make its own nitrates so is useful for a soil-fertilizing plant. It is often used as fodder for livestock. It is common throughout the country and flowers between May and September.

Field Bindweed is a relative f the Morning Glory family. It is a garden weed that twines itself around other plants choking them in the process. It has funnel shaped flowers either white or pale pink with five darker radial stripes.

Hawthorn can be a shrub or small tree. It has thorns growing on its branches. Its fruit are known as Haws and have a stone similar to plums or peaches.
The hawthorn provides food and shelter for many birds and mammals and the flowers are an important source of nectar for insects. The berries are particularly important for wildlife in winter, especially thrushes and waxwings.
The Haws are sometimes used to make jelly or homemade wine. The young leaves and flowers are edible and can be used in salads. These have been referred to as 'bread and cheese'.

The Southern Marsh Orchid can be found on damp or wet, chalky soils, marshes, fens and wet meadows. It is a very striking orchid and one of Suffolk's more frequent orchids. Widespread drainage and development of land has led to a decline.

Pink Sorrel belongs to the Oxalis genus which is native to South America. It is more common in the southern half of the country. It is a rhizome with pink petals and five stamens with yellow anthers. Its leaves are three-lobed with orange spots on the underside.

This is a tall plant with narrow, long finely toothed edges to the leaves. The pink flowers have four notched petals and the stigma is club shaped. It grows in damp places such as ditches, woodland clearings and the sides of streams.

Dog-rose is a scrambling shrub found in hedgerows. It has sweet-scented pink flowers with a yellow centre. In the autumn it produces bright red rosehips. These are eaten by birds and mammals. They can also be used for making wine and rosehip syrup. The syrup contains twenty times more vitamin than oranges.

This is a hardy plant. It grows between 10-25 cm in height and is pyramid shaped, hence its name. It can be found throughout the UK. They flower between June and late July.

The Sweet Briar looks much the same at first to the Dog Rose with similar flowers and foliage. The Sweet Briar leaves give off a sweat apple scent especially after rain or in humid conditions.
It is found in hedgerows and in exposed areas such as coastal sites.
Bees and hover flies are attracted to the flowers and various kinds of birds feed on the hips. The hips contain vitamin C and are used in cosmetic preparations.

The Wild Carrot is also known as Queen Anne's Lace. The flower is on a long stalk and looks like an upturned umbrella and blooms between June and August. It only has the pink appearance when it just starts to open. Once open it is totally white with the exception of one red/purple flower, usually near the center. It grows on grassland, cliffs and roadsides.

Tender Thistle grows to over 2 metres with a ridged stem and wings with long spines. The plant may have up to twenty flower heads which are rounded, with spines and pink/purple tube florets. It grows by roadsides and disturbed areas.

Common Restharrow is a low growing plant with pink flowers that can be seen from July to September. It grows on chalk and limestone on grassland and coastal areas.
The plant contains iron, sulphur magnesium and calcium.

The Great Willowherb is a tall perennial reaching up to two metres in height. It has a hairy stem and leaves. The flowers are pink/purple with four notched petals. It grows in wet, damp habitats where there is little tree cover such as marshland, ditches, riverbanks and streams. It flowers from June to September attracting various types of insect.

Betony is a perennial flower found on grassland and open woods. It has spikes of pink/purple flowers on a long thin stem. It flowers from June to September. It is much liked by bees and butterflies.

This is a bushy plant with long, toothed leaves that grow in opposite pairs on a reddish stem. It grows in damp grassland, marshes and fens and along river banks. It flowers from July to September and is attractive to many insects. It is sometimes called 'Raspberries and Cream'.

Thrift is also known as Sea Thrift or Sea Pink. It is a perennial that grows in clumps, sending up long stems that support globes of bright pink flowers. It oftens forms carpets on coastal cliffs. It also grows in salt marshes and is used in garden designs.

Bell Heather is a low spreading shrub with fine needle like leaves. The flowers are bell shaped and appear mid to late summer. It grows mostly on moors and heathland.

Water mint grows in damp places. The stems are square, green or purple in colour and can be hairy. The flowers are densely crowded and pinkish in colour. Flowering is from mid to late summer. Many insects and butterflies are attracted to the plant. When the leaves are rubbed there is a distinct minty smell.

The cuckoo flower or lady's smock as it is sometimes called has clusters of pale pink, almost lilac flowers, each with four petals. It flowers April - June and grows up to a height of 24 inches. The flowers are 1 to 2 cm across. The cuckoo flower has a rosette habit. The stamens are half the length of the petals.
It is a perennial which really does stand out, the yellow anthers being quite bright. and almost glisten in the grass.

Other Names
These wildflowers also called lady's smock - the simile to a maids smock makes for a romantic notion of these flowers.
Attributed to the Virgin Mary
When Christianity came this feminist association was attributed to the Virgin Mary - which led to the flowers also being called. my lady's smock, lady's glove.
It is also sometimes called Lucy, Shoes and Stockings, Gilliflower, Apple Pie (which refers to the smell of the flowers) and many others.
Bridal Bouquets
The Lady's Smock was often used in bridal bouquets - but never in the month of May when it was thought to be unlucky.

As the year draws to an end my blog on 'pink' flowers must also. I've enjoyed photographing the pink flowers and also discovering a little bit about each one of them. I have been most surprised at how many have medicinal uses or can be used in culinary creations.