How often do you hear people confuse crickets with grasshoppers? There are several differences although they look similar.


The grasshopper goes out during daylight hours while the cricket goes out at night.

The grasshopper is larger than the cricket.

The grasshopper comes in colours of: neutral, green, grey or light brown. The cricket comes in bright and dark colours.

Grasshoppers can fly and jump while crickets only usually jump. The cricket also has longer antennae.

The cricket makes a chirping sound by rubbing its wings together, while the grasshopper rubs its wings with its hind legs.

There are several different types of both English grasshoppers and crickets. Some of these are shown below. 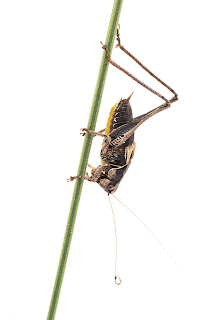 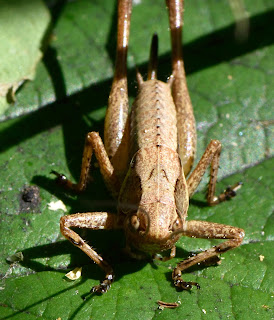 The dark bush cricket can be found in southern and central England and south wales. It is dark brown/red in colour with a yellow/green belly. It has a pale patch along the top of the thorax.
It can be found in gardens, hedgerows and woodland edges. It can also be found sunbathing on bramble patches. The cricket is noisy in late summer and also very aggressive. 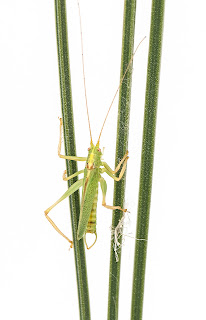 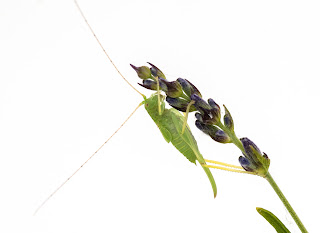 The oak bush cricket has a narrow lime green body with medium length wings and an orange/brown strip running down its back.
It flies at night and is attracted to lights. It drums its hind legs on leaves.

The Speckled Bush Cricket is green and covered with tiny black speckles. It has an orange/brown stripe down its back. It looks to be humped backed and has very short wings.
The Speckled Bush Cricket prefers rough vegetation, hedgerows and scrub. It can also be found on bushes, window ledges, leaves and flowers. It is most active at night and attracts the female by rubbing its wings together. 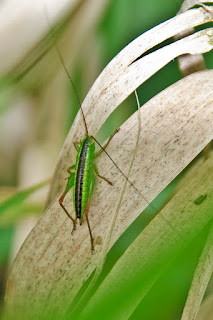 This cricket is small with a brown stripe along its pronotum and brown wings. The wings only come part way down the back.The Cone-head can usually be found on coastal salt marshes and sand dunes and inland on bogs, fens, reedbeds, pools and lakes. It is mainly found in southern England. 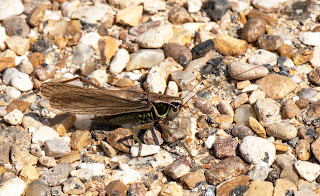 The Roesel is a medium size bush cricket. It is usually found around East Anglia but is gradually spreading north and across to west Wales. It can be found in coastal grassland, lush meadows,road verges and railway embankments. It has a high pitched electrical discharge song. The adults usually appear from July through to October.


Image coming soon
This is a medium sized grasshopper with wings no longer that the length of its body. It is common throughout the country and can be found between July and November. They can be found in grassland, damp meadows, woodland rides and some hillsides where there are streams. They can usually be found by their chirpy song. 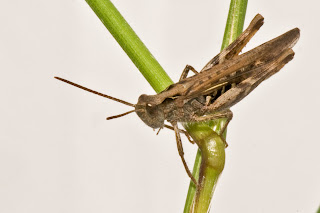 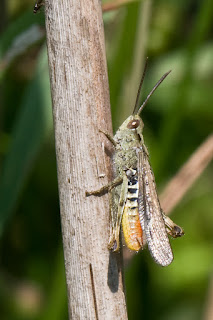 The Field Grasshopper is common throughout southern England and lowland Wales. It can usually be found on dry, sunny slopes where there is bare soil or rocks. The males can be located by their two chirp call. They can be found from June right through until December. The colours vary greatly on this species. 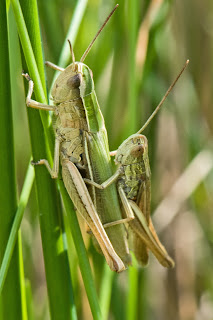 This is a medium size grasshopper that can be found in southern and eastern England. It can be found by listening closely in salt marshes, along coastal river banks and damp meadows. They appear around July and mainly eat grass. 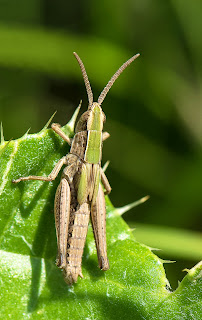 Meadow grasshoppers can be found jumping near your feet if you walk through long grass on a hot, sunny day. It is a medium size grasshopper - the male having long wings and the female usually short wings. They usually appear in June and can be found until October, sometimes November. They can be found on all kinds of grassland and also heathland, chalk downs and sand dunes.

This is an on going project and new images will be added from time to time.